Forum Phoenix said:
Maybe it’s like Bikini said and Staj thinks the quickest way to getting local supporters offside is to bench Matty. Might be time for the ramble team to bring clarity on this.

Though I have to say, I think it’s mostly likely because Staj, who watches our players the most, still sees Matty as the best option.
Click to expand...

. my somewhat cynical follow-up is that Staj has a 3 year deal and does not know what resources he will have to improve the squad next year ... but ... he does have a ready-made improvement ready to roll out

bikinigirl said:
. my somewhat cynical follow-up is that Staj has a 3 year deal and does not know what resources he will have to improve the squad next year ... but ... he does have a ready-made improvement ready to roll out

& what? or who? is this 'ready made improvment' you speaketh of ???

We appreciate the questions everyone has asked but we don't want to get hung up on with some derisive questions haha. I agree we have to ask about Matty but we can't phrase it how some on here have haha. We have plenty of questions and we'll do our best to get around to all of them.

Thanks everyone who gave us questions to ask Staj. We got around to many of them. Had a great 30 or so minute chat with Staj who is a really nice fella and very laid back. Visible change however when we started talking football where he is as serious about getting the club back to where it belongs as the fans are. I think we've finally got the coach we've needed for a while.

Hey everyone, pod will be a little late with Jimmy being busy but in the meantime, l was a guest on an Adelaide United fan run podcast who had me on to talk about the FFA Cup game, our squad, Staj and more. I don't like listening to myself so give it a listen and let me know what you think. Cheers.

We apologise for the poor audio quality in this episode, this was due to a few technical difficulties.

Gianni Stensness and Iain Shand join us for a chat.
We discuss the WSW game and look forward to the F3 derby. 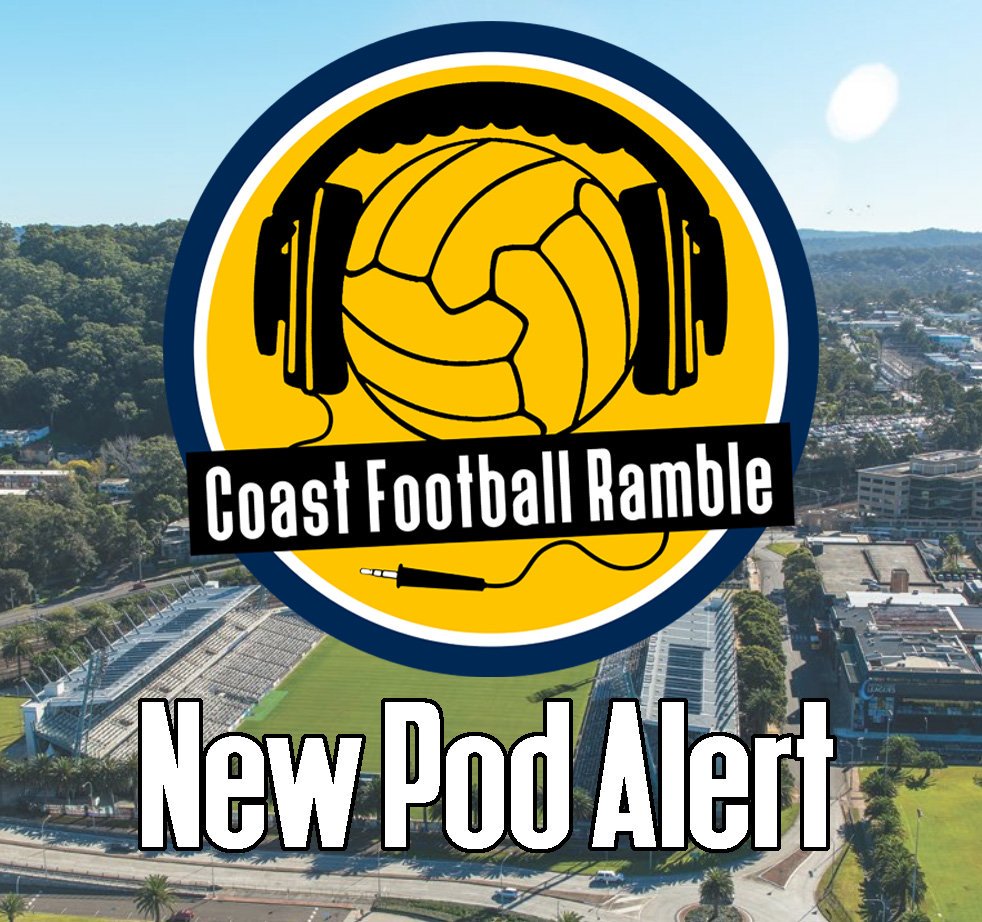 Enjoyed the pod as usual guys but just one comment on your writing off of the bottom 4 so early. Wellington have played 3 games for the 0 points. the next 3 above them have all had the bye. You may be right - but it is a bit early to be writing them off.
T

I like the "New Pod Alert", not that is was a problem before. Good to see you boys doing regular pods this season and hope the team keeps giving you reasons to.
B

As for Murray he definitely grabbed at his hammy about 5 mins before halftime (clearly visable on TV. He was able to keep going but there was discomfort. It’s definitely legit. Simon would be warming up anyway but Staj is not afraid to play them together. Will be interesting to see if Murray stopped playing in time and was just tightening or is out for a few weeks

Enjoyed the episode as always. Some more positive comments about Jair than we had on here.
As for VAR - I made some comments elsewhere about VAR.
Initially I was all for it, now I think it's the worst thing to happen to the game.
Now, referees are never going to get it 100% right. Some things - such as tight offside decisions - are simply not possible to be 100% accurate on. Sometimes referees only have a partial view of an incident, coupled with dealing with players embellishing and carrying on, they're making decisions in the heat of the moment with fatigue - and sometimes they see an incident and just make the wrong decision. So, VAR is supposed to smooth all that out, right?
Except how often does the VAR get it wrong? How many times has the VAR intervened and a decision overturned when it shouldn't have?
Sure, there are definitely times when an incorrect decision is overturned with VAR, but is that outweighed by when VAR incorrectly overturns a decision? All we're doing is replacing some wrong decisions with others.
THEN there's the incorrect decisions that are clearly and obviously incorrect but VAR doesn't overturn. I'd argue that VAR has gotten more wrong than right this season with a combination of the above.
Now, you could argue that when the VAR incorrectly fails to overturn a decision that VAR has made no difference, except we all believe that having VAR is influencing referees away from making some decisions. How often do we see a decision changed with VAR when there was no real reason for it to be wrong in the first place? Understandable errors - difficult to spot, etc - sure, but all too often VAR is used to overturn decisions that the referee should have gotten right to start with. ARs now have basically lost a lot of responsibility in helping the referee with penalties and cards - because why would the ref use the AR to help with that decision when there's a VAR?
So, AT BEST the VAR is simply replacing some wrong decisions with others - but I'd argue that VAR not only usually gets it wrong but increases initially wrong decisions.
When I was still refereeing, there was a new assessment methodology based on KPIs. Basically, make a single significant match-changing error, and the entire performance is 'unsatisfactory'. That's basically an error around a goal, penalty or red card. So, every time a refereeing decision is overturned with VAR, that referee has made a significant match-changing error.
Moving forwards, there's my argument about the decision making of VAR. That's only the START of the problem.
For one, we've seen that incorrect VAR decisions almost always favour the bigger team of the match. That's not conspiracy - it has been demonstrated repeatedly. We've seen it with every single incorrect VAR decision this season. As to why - who knows. But we've seen the FFA come out with incorrect statements to defend this, and so it seems the FFA are complicit in this. Why?
That brings me to this point - VAR has increased PERCEPTION of a biased league. I've seen a lot more complaints of bias and rigging the comp since VAR came in. Fans accept (more or less) that referees make errors. And we know there are reasons for those errors - or they are just mistakes. VAR though? You can't attribute clear errors to a restricted view, or a poor decision made under pressure. So when you remove the reasons for a poor decision, all that remains starts to look like compromised integrity.
The Australian print of the Laws of the Game used to instruct referees to BE FAIR and BE SEEN TO BE FAIR. With VAR, the HAL fails to complete the latter, if not the former.
And then there's the simple problem that often it's so hard to celebrate a goal these days, or a penalty save.
So, it's ruined the culture, it hasn't done anything to help decisions accuracy (the FFA reports that it has, but we all know that's bullshit), and it leads to the league being perceived more poorly. Therefore, the VAR is a cancer on the sport and needs to go.

Just my comments on what you said about that sub stopping the ball going over the goalline and a penalty being awarded - I'd argue that's EXACTLY what the VAR is for. An objective decision around a penalty kick that the ref and AR missed. Whether the law there is fair is not relevant - the law is black and white and one team had every right to a penalty kick. Sure, maybe the law should be rewritten to allow the ref some flexibility to maybe award an indirect if there has been no impact on play, but currently it doesn't - so that means no room for discretion.
But this is something that was the AR's job to pull up - so why didn't they? And would they have if it was a match without VAR? It can be a little difficult to tell if the ball has crossed the line when looking through the goal netting, but surely it can't have been all that close or else the VAR would have had to give them the benefit of the doubt. So, I would assume that without VAR, the AR would have called this, so I don't think this incident is an indictment on VAR - if anything, it highlights a potentially unjust law.

And that's another thing - for all those incorrect decisions the VAR has overturned, would the decision still have been wrong in a non-VAR league or would the referee have actually made a decision the first time around? So I'd argue that a number of those the VAR changes to a correct decision - were only incorrect to start with BECAUSE of the VAR.

Annnnd as usual my rant got way longer than I intended. Carry on!

Dylan Fox joins us for a chat.
We discuss round 4 of the A-league including our win over Perth.
And we look forward to the City match.

Great episode but someone tell Josh that Milan hitting the post and DDS getting the ball caught under his feet doesn’t equate to two extra goals we could have had in that first half.

Milan hitting the post and DDS getting the ball caught under his feet doesn’t equate to two extra goals we could have had in that first half.

I love your pods guys, but I still regularly find myself wishing you guys spent a chunk more time breaking down our games, players and tactics. (Especially when we win) Only have a passing interest in the other teams performances /rounds. But a strong interest in us.

Maybe you’re worried about boring us? but I’d really enjoy you all talking a lot more at length about our games.

Fox bored us - he could bore for Australia

marinermick said:
Great episode but someone tell Josh that Milan hitting the post and DDS getting the ball caught under his feet doesn’t equate to two extra goals we could have had in that first half.
Click to expand...

Fair call FP, definitely possible to do a bit more talking on our game.
F

Fair call FP, definitely possible to do a bit more talking on our game.
Click to expand...