Wombat said:
We had a W League team with a gun Yank CF from blurry memory.
Click to expand...

Can't remember the American lass but we also had Kyah Simon and Michelle Heyman, as well as a few other Matildas now retired. We made the grand final.

The team was funded by Football NSW and run out of Knox Grammar with coaching links there.

When Football NSW pulled funding the team disappeared.
I

Mick,
I now think the Yank lass might have played for the Scummers????
I only watched a couple of W League games while on the road and was without doubt I would have been hungover or working on one.
It's a lonely job as a Travelling Salesman

Wombat said:
Mick,
I now think the Yank lass might have played for the Scummers????
I only watched a couple of W League games while on the road and was without doubt I would have been hungover or working on one.
It's a lonely job as a Travelling Salesman

I have thought about this and I am now pretty sure we had a couple of young American players sourced by the educational links at Knox. They weren't top flight players but I think one played more than the other.

I spoke to someone involved with the bid (I don't feel I should name) who's opinion was the FFA were jerks and our bid for a team wouldn't get up because they wouldn't want to change the scheduling and extend the season too much. Now this:

Central Coast Mariners likely to miss out on W-League team for upcoming season
Daily Telegraph
CENTRAL Coast Mariners owner Mike Charlesworth has unloaded on Football Federation Australia after it was revealed the club's goal of...

Can someone cut and paste the document?
B

Just madness when there is a bye in the comp.

Can only mean that Fox/ABC does not want to broadcast an extra game a week.
B

It was pretty evident we missed our chance last time. The FFA had been saying they didn’t want changes but we pushed on and are rejected.

To little to late
B

marinermick said:
Just madness when there is a bye in the comp.

Can only mean that Fox/ABC does not want to broadcast an extra game a week.
Click to expand...

They talking streaming anyway so doesn’t need to broadcast every game. We could be the stream game of the week every week
N

If this is the case, then this is DISGRACEFUL. Will the club be able to challenge this? Particularly given that it contradicts FFAs own policy as per the article
Central Coast Mariners have been left confused by FFA’s response to the Mariners WWL bid which contradicts the governing body’s own 2015 Whole of Football plan.

Page 87 of the document states:

“At a minimum, every top tier club in Australia should have an A-League team and a W-League team. This is important because: Unlike every other Australian sport, football clubs will be able to connect to their communities by providing male and female role models. Above everything else, football fans appreciate good football and the W-League is top quality football that attracts male and female fans. Furthermore, having an A-League and W-League team will allow clubs to host more top quality double headers.”
B

Totally out of touch with the game, and contradictory to there own plan.
Is anyone surprised by this?
T

Blackadder said:
Totally out of touch with the game, and contradictory to there own plan.
Is anyone surprised by this?
Click to expand...

Reading between the lines the rejection from ffa is not all that unreasonable when you consider mc’s record of payment failures and fielding a team for the collection of wooden spoons. The bid relied on the funding ffa were providing.

Except that our women's teams have been performing strongly. Whether or not the women's team can exist shouldn't be determined by the recent performance of the men's team.
A

Maybe the FFA are holding that 10th spot open for the expansion team, and screw you CCM we never liked you anyway.
The worry is if we don't get a Wleague team in the next few years, will the gun players and coach we have, leave to go back to club football or down to Sydney were there are 2 teams currently.
We should get behind the women. Over the past few seasons it has become great to watch. Having them play before the men could draw in new members, and we need as many members as we can.
B

Newcastle’s oldest rival set to return to the W-League in new expansion wave
The Mariners are calling for expressions of interest regarding their new W-League team.

Michelle Heyman was one of Central Coast's stars during their first W-League stint in 2009.
Ten years after the Central Coast Mariners brand disappeared from the W-League, Newcastle’s local rivals are set to re-enter the competition as it expands under the guidance of the Australian Professional Football Clubs Association (APFCA).

The last Mariners venture to play in the women’s national league was helmed by Football NSW rather than the Central Coast club itself, and while the coastal team was present for the first two seasons of the competition, they pulled the plug.

Their departure in 2010 left the W-League with just seven teams on the bill—Adelaide, Brisbane, Canberra, Newcastle, Perth, Sydney, and Melbourne Victory. Since then, Western Sydney and Melbourne City have joined the league’s ranks.

Now, as part of the APFCA’s mandate for “every A-League team to have a W-League counterpart” in their one-club philosophy moving forward, it seems like the Mariners will be returning a decade after their departure. 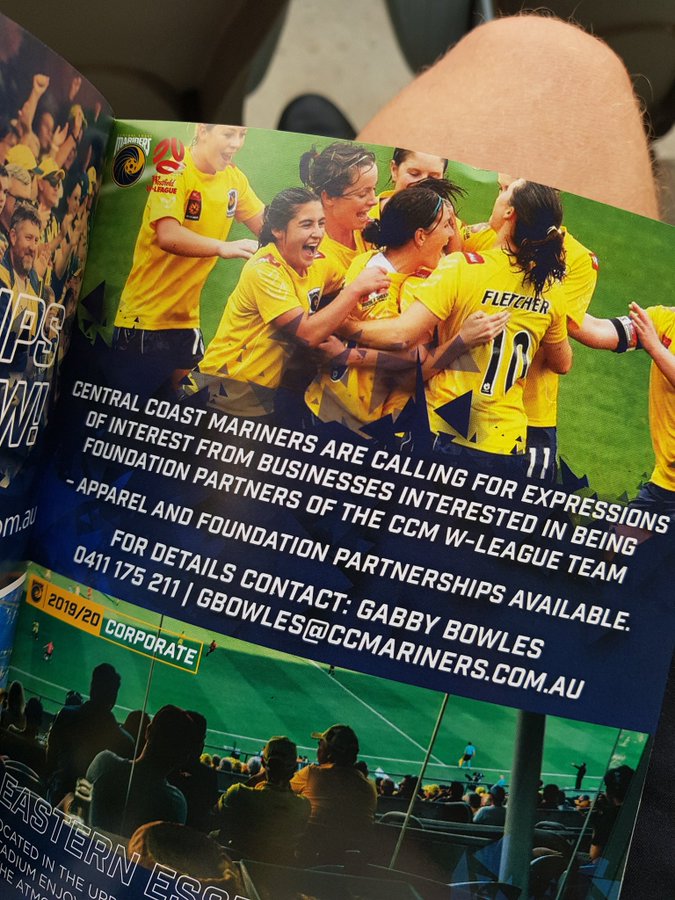 The Mariners have called for expressions of interest in forming business partnerships for the “foundation team” (due to Football NSW running the last venture), as well as potential apparel deals for player kits and merchandise.

This expansion plan may also see Western United join the W-League in the near future after an APFCA representative told The Guardian one of their key plans for an “independent W-League” would be 16 core teams.

That expanded competition—seven teams more than the national competition now boasts—would also bring with it a fully home-and-away season, where each club plays each other twice in a 30-week round-robin format.

For the Newcastle Jets, the Mariners’ ten-year return means a local derby is finally back on the cards. Sydney FC and the Wanderers are both close to Newcastle, but neither provides that local rivalry spark the Central Coast has this century.

With two clubs within reach of the region, the chance for young players to step into either the Jets or the Mariners’ academy pathways will also be key to seeing more Hunter stars making their way towards the limelight.
There’s been no indication if the Mariners are preparing their W-League systems for the 2020/21 season, but considering the APFCA is keen to push expansion, and has been backed by the FFA, Professional Footballers Australia, members federations, and the Women’s Council, it would be no surprise to see them re-join next year.

For now, the Jets have their own campaign to worry about before their rivals appear on the horizon. Craig Deans’ squad is caught six points outside the top four, and have struggled to find an offensive cohesion. They’ve clocked up just one win in six.

Tomorrow we are formally applying again for CCM to be included into the W-League. This is something that is very important to us as a club to be allowed to grow and complete our Football brand just like every other Australian based A-League club is permitted to do. We have some great sponsors lined up and even better some brilliant players.

I will be putting a call out for everyone to show there support by signing an online petition or head down to a WNPL match and cheer our girls on. One of the key things we need to prove is that there is enough support to know that the crowds will be strong and the support even stronger. Please feel free to ask me any questions and I will try and answer when I can.

The change rooms are being built and the talent is there, the bye round is there to be filled and it makes no sense to not include us.

Thanks in advance for all your support on this.
Click to expand...

Hey Shaun - care to comment on the latest article?

If we are to have a fair dinkum W-league team then we have to get the Local Association involved.
I wrote a development plan for Women`s football over 20 years ago for FNSW and encouraged the clubs of Macarthur to embrace Womens football as a way to the future success of the game.
In the time since, a lot has been done with the Matildas and with youth development at rep level but if CCM are to be proactive with Womens football they need to go deeper.

They need to develop girls from an early age.
By this I mean firstly they have to increase the talent pool.
Develop a strategy to get more young girls at entry level football. ie have a radio campaign to get 6 year olds (and up) to play.
Team with the local association to form all girl junior competitions the same as the boys.
Encourage the clubs to actively recruit girls for these competitions.
Sure they can have still have mixed teams like now but also have all girl comps too.

From there have the W-League coaches and players visit schools with Mariners players.
Show the younger girls that they can play too.
We need to break the mould and have an environment whereby the girls feel comfortable competing with other girls.
We need to show young families that their daughters can enjoy Football too.
It`s a long term strategy but one that I feel would produce dividends.

From the program I implemented at Macarthur 20 years ago 4-5 Matildas have emerged including current Matilda Alanna Kennedy.
Time doesn`t allow us to to build from the bottom,we need to start at both ends not just at W-league level.
You must log in or register to reply here.
Share:
Facebook Twitter Reddit Pinterest Tumblr WhatsApp Email Link
Top