Staff member
So yeah this is a bit of a bland topic, but I guess most stuff in the "ccmfans.net" bit will be.

We're currently looking at ways of growing the forum, increasing numbers of posts and people posting - as well as lurking - and the post count in threads has come up.

I think there is a bit of a perception sometimes that the forum is dead, even though there are 250-1000+ posts per week on here. 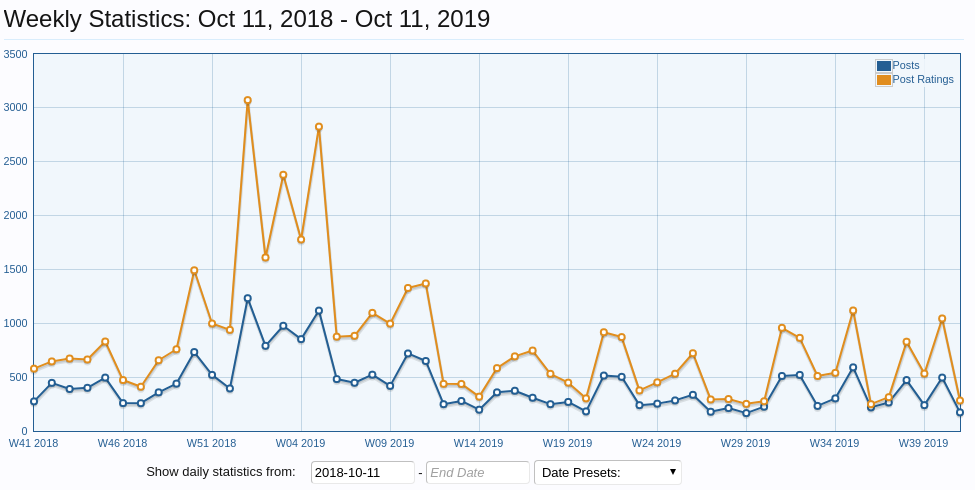 Still a far cry from the early days post-count wise but with less in-jokes and general shit, and generally better quality and more interesting content (hopefully).

Just scrolling down the topics list of "Central Coast Mariners FC" shows threads with a high number of replies, but it doesn't take long to get to threads that haven't been active for quite some time. The last thread on the first page is about Usain Bolt and last replied to in July!

I think this gives the appearance of being far less active than it is, and maybe part of the reason people get turned away from posting or reading the forum is because they think it's dead?

A lot of our topics also divert and change direction a lot, so whatever the topic title says ends up being a long way from what is actually being discussed. Some threads could really be split up into half a dozen or more separate threads.

I think this makes it hard for someone who casually comes across the site, doesn't want to read every post; it's not obvious looking at the topic title what is actually being discussed... or if it gets into the season and I want to see what people were saying about a specific round, I don't want to wade through hundreds of posts to get to it.

Also from a technical, SEO point of view, it makes more sense to have better, well defined topics.

And finally, there is some development underway to move to a more modern, real-time type forum, which probably needs smaller, more digestible threads... That probably doesn't make any sense right now, but I am aiming to migrate users and posts and stuff across, and have a test forum up and running pretty soon, so we can evaluate it and see if it's the right fit for us... things should be a bit clearer then.

I personally prefer less threads as they are easier to navigate and scroll through. I get genuine anxiety when something is bolded and I haven’t read it. The same anxiety that makes me disable notifications on all apps as I hate having numbers next to my apps.

However, everything you wrote makes sense and you’re the boss.

Just don’t change things because you think this isn’t a vibrant community. It certainly is.

lol not sure if that's a dig but I should have added I am opening this for discussion - I want to do what's best for the community in general, so that's people posting now and potentially in the future. No point making changes if it's going to piss everyone off.

No dig. You put all the time and effort in so it must be good for you as well.

Staff member
You made some interesting points though and something to think about. I'm not really sure how to get around the topics being bolded when unread, maybe there is a more discreet way of showing unread stuff or ... not really sure.

adz said:
You made some interesting points though and something to think about. I'm not really sure how to get around the topics being bolded when unread, maybe there is a more discreet way of showing unread stuff or ... not really sure.

I am happy with them being bolded. Shows what I need to read. Lots of topics means I have to click more threads to remove all the bolds however.

Bear in mind that is my own OCD, and should not dictate how this forum is structured.

Staff member
All good I think it highlights a need to maybe be able to read multiple threads at once? Bit of a "catch up" function.

Staff member
Actually thinking about it, there is usually a "unread posts" function on forums. So you have everything in one place - good if youre not fussed about threads and such.

Maybe have an emoji for when posts are getting 'off-topic' of thread.

Simple un-antagonistic way of highlighting it to someone.

If they're a habitual offender, it will become clear to all (& you) for further warnings by admin.

Just the other day frick'n "NRL scoreline's from the 1970's" were being inserted/talked about in a CCM thread - over multiple pages, I just couldn't be bothered even saying anything, even though it did my head in.

But totally get where your coming from Adz.

adz said:
Actually thinking about it, there is usually a "unread posts" function on forums. So you have everything in one place - good if youre not fussed about threads and such.
Click to expand...

I don’t know how others navigate but I almost only use the new posts button.

My biggest issue is I still feel like a Luddite when it comes to getting gifs to work on here for some reason. But that could well just be me.

Perhaps the broader topics in the menu are not compelling enough and don’t draw people in at a first glance?

And or then maybe once clicked on it’s just a bit too much of a stew possibly “.

Such as if you click into the CCM FC thread. It would then open and had headings more like:

Perhaps Instead of
CCMFans and the club...

CCM Official Channel.
(A direct line to the Mariners CEO)

While I know what I’m going to get in most threads I click on, at first glance quite a few are not super clear or immediately enticing.

Anyway just spitballing mate. You do a great job.

Staff member
Cheers @Forum Phoenix, always looking for feedback - positive and negative! The negative stuff is probably more important because it's things that need to be fixed. Not many people are interested in this stuff though - I still remember in the early days being told "we don't give a shit as long as it works!"
You must log in or register to reply here.
Share:
Facebook Twitter Reddit Pinterest Tumblr Email Share Link