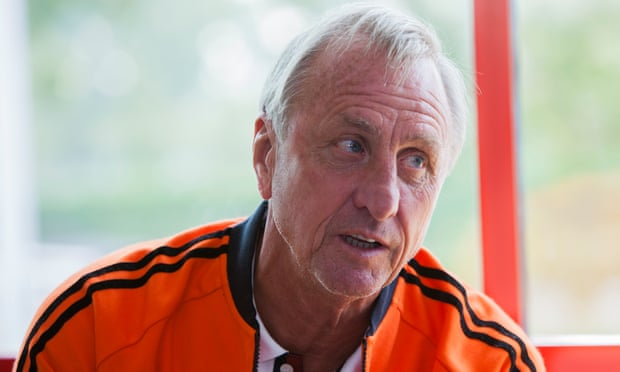 Johan Cruyff, who won the Ballon d’Or three times in his illustrious playing career, has died at the age of 68. Photograph: Niels den Haan for the Guardian

The Holland football legend Johan Cruyff has died of cancer at the age of 68. The Dutchman, who on three occasions was voted the world player of the year, guided Holland to the World Cup final in 1974 and as a manager he spent eight years in charge of Barcelona.

“On March 24 2016 Johan Cruyff (68) died peacefully in Barcelona, surrounded by his family after a hard fought battle with cancer. It’s with great sadness that we ask you to respect the family’s privacy during their time of grief,” read a statement on the World of Johan Cruyff website.

Just last month the former Ajax, Barcelona and Holland star, one of the main exponents, along with Rinus Michels, of the world famous Total Football – the Dutch style of play that involved players constantly interchanging roles – popularised in the 1970s but still playing a major influence on modern football, said he was ‘2-0 up’ in his match with lung cancer.

“With great sadness we have learned of the death of Johan Cruyff. Words are not enough,” wrote the Dutch football federation on Twitter. Ajax issued a short statement that read: “Johan Cruyff has died in Barcelona at the age of 68. The greatest Ajax player of all time had suffered with lung cancer since October last year. Ajax share in this great loss and wish the families much strength.”

Cruyff, who was a heavy smoker until undergoing heart surgery in 1991, made his illness public in October last year. He was regarded as one of the game’s greatest players. He led Ajax to three consecutive European Cups from 1971 to 1973 and was the linchpin for Holland as they were beaten 2-1 in the final of the 1974 World Cup by West Germany. During the tournament his eponymous turn was first seen against Sweden and soon copied the world over.

By then he had joined Barcelona for a world record fee. He went on to become a huge favourite at the Camp Nou, eventually coaching the Catalan club to a first European Cup triumph in 1992 as well as winning four successive La Liga titles between 1991 and 1994, having managed Ajax from 1985 to 1988. Barcelona tweeted: “We will always love you, Johan. Rest in peace.”

As a player Cruyff scored 392 times in 520 games over a 19-year career but his influence reached far beyond creating goals, thanks to his qualities as a leader, thinker and speaker. As a coach he had 242 victories in 387 matches, with 75 draws and 70 losses.

The current and five-times world player of the year, Lionel Messi, was among the first to pay tribute to Cruyff, writing on his Twitter account: “RIP Johan Cruyff. Your legacy will live on forever.” 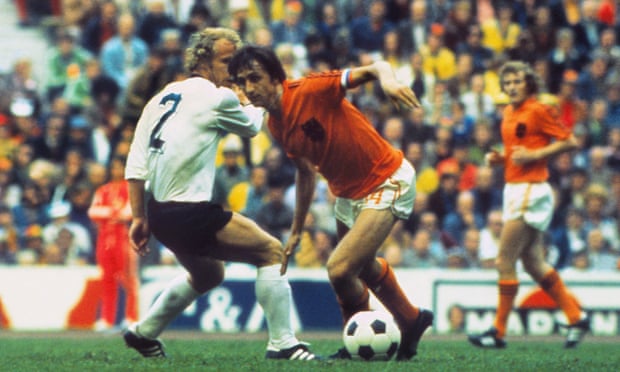 Facebook Twitter Pinterest
Johan Cruyff led Holland to the final of the 1974 World Cup, where his side were beaten 2-1 by West Germany. Photograph: Colorsport/Rex/Shutterstock
The Belgium captain and Manchester City central defender Vincent Kompany was quick to follow suit. “Johan Cruyff, true football royalty. I don’t think anyone has ever influenced the game as much as he has done. We have all been touched and inspired by his vision and his believes. Football will miss him but we will never forget. #JohanCruyff.”

Ruud Gullit, who played with Cruyff at Feyenoord, said: “I’m perplexed, I thought he was getting better. Holland lost a face in the world. He put our football on the map. Furthermore he’s been extremely important for my career.”

His is a true legacy created and it will always be looked back upon as a pivotal and defining era of the game. He was a brilliant exponent of the Dutch style, that of Total Football.

To a man who gave so much to football and it's fans around the world, R.I.P.
F

Used to love teaching kids the "Cruyff turn" and they'd go "the what?" Then... "The who?" And so I'd get to tell them all about a truly great player, who wasn't an egotist, but was hard working, truly creative, and a talented leader in every respect. True role model.

We all have to go sometime... but what a loss. Thanks for posting that Johan Cruyff is art also Pat. Loved it.

RIP Johan. Thanks for the memories, what I was able to learn from you, and the enormous contribution to the game we all love.

Even when I wasn't interested in football, I heard of this man. Shows you how influential he was.